Donald Trump: "Nobody's Ever Heard of Numbers Like This!" 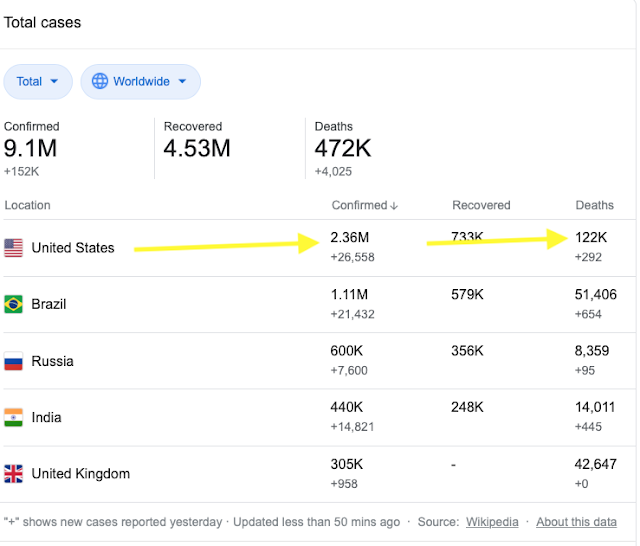 Your inactions are responsible for those numbers, Mr. President.  The Greatest numbers like nobody's ever seen!

Posted by Jerry Morris at 11:57 AM No comments:

I want to thank all the Trump supporters who did not drink Trump's kool-aid that the Coronavirus was disappearing.

Your decision to stay home and avoid attending the rally will help prevent the spread of the virus.  Moreover, your actions will actually save lives.  Thank you for that!
Posted by Jerry Morris at 3:22 PM No comments: 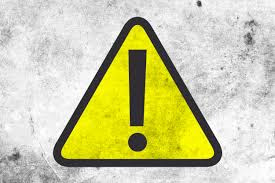 The World Health Organization has determined that voting for listening to Donald J. Trump is hazardous to your health.
Posted by Jerry Morris at 11:23 PM No comments:

Why do the governors have to bid against each other to acquire the necessary PPE for their health care workers?

Why doesn't the American Chamber of Commerce want the President to invoke the Defense Production Act to manufacture and procure the necessary PPE?

Is Jared Kushner running an off-government crisis response team during this pandemic?

Is Jared Kushner's off-government response team interfering with the government's response to the pandemic?

Are the actions and inactions of the government  regarding the acquisition of PPE putting the lives of our health care workers at risk?

These questions need to be asked now.  And they should be answered now.

Posted by Jerry Morris at 8:06 PM No comments:

Donald Trump and the Lack of Preparations for the Coronavirus

Last month, responding to a question from a reporter about why he has consistently called for “enormous cuts to the CDC, the NIH, and the WHO,” Trump responded:

“I’m a businessperson. I don’t like having thousands of people around when you don’t need them. When we need them, we can get them back very quickly."


Click on the Hyperlinks Above the Images to Read the Articles 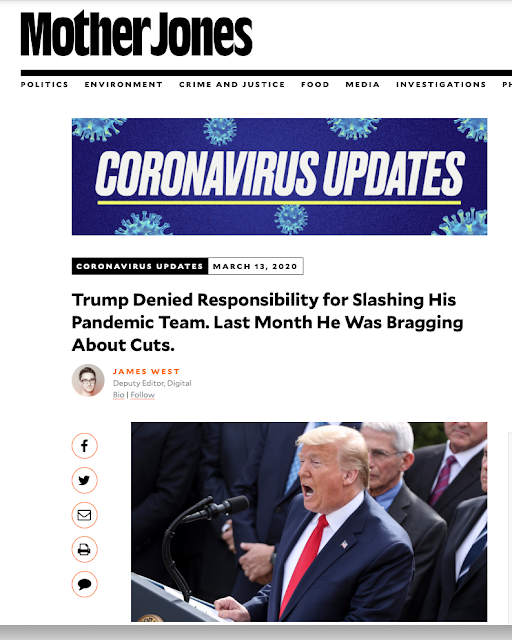 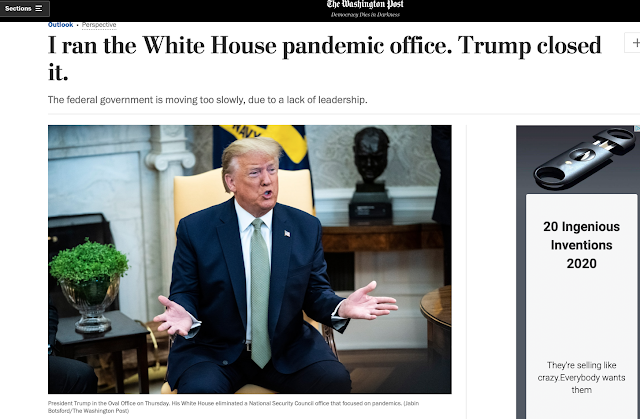 Posted by Jerry Morris at 3:31 PM No comments:

The Impeachment was Real. The Trial was a Hoax.

75% of the American public wanted to hear witnesses at the impeachment trial of Donald J. Trump.

But Republican Senators voted that no witnesses would be permitted  to testify.


57% of the American public wanted to give the House Managers the opportunity to present new evidence at the impeachment trial of Donald J. Trump.

But Republican Senators voted that no new evidence would be allowed to be presented.


Donald J. Trump withheld military aid to the Ukraine in exchange for help in the 2020 election.

Republicans voted that Donald J. Trump was not guilty of Abuse of Power.

Donald J. Trump ordered his cabinet officials not to testify at the House Impeachment Hearing.

Moreover, he directed government agencies to ignore subpoenas for evidence relevant to the impeachment investigation.

Republicans voted that Donald J. Trump was not guilty of Obsrtruction of Congress.

The Impeachment was Real.  The Trial was a Hoax.


Posted by Jerry Morris at 6:24 PM No comments:

The Imminent Threat is Donald Trump

Make no mistake about it.  The imminent threat to the United States of America is Donald Trump.  Whatever is in his best interests is the course of action he will take for the nation, regardless of the consequences.
The Trump Administration has said that the assassination of General Soleimani was justified because he was an imminent threat to American lives.  Yet, the Administration has not provided Congress with any evidence to show that Soleimani's killing was justified.  Nor did it brief Congress before the assassination.  And I wonder if Trump thought thru the consequences of his action.
Before the election in 2012, Donald Trump predicted that Barack Obama would start a war with Iran before the election.  He believed that was the only way President Obama could be reelected.
Now we are really on the brink of a war with Iran, not only before another election, but while Donald Trump is facing an impeachment trial.  He has already tweeted that the Impeachment HOAX needs to be over and done with because he has more important matters to deal with –– matters of his own doing.
Donald Trump has already said that the United States will attack 52 targets, including Iranian cultural sites, if Iran retaliates to the Soleimani killing.
No one seems to have mentioned what Russia or China will do if Trump follows through on his threats.  I doubt that either Russia or China will stand idly by while Trump annihilates Iran....
So what must Congress do?
Congress must decide if Donald Trump himself is the imminent threat.   Congress needs to demand to see the evidence from the Trump Administration that the killing of General Soleimani was justified.  What was the imminent threat? If there was not an imminent threat, then Congress needs to include the additional facts into the articles of impeachment:  That in authorizing the assassination of General Soleimani, Donald Trump compromised the security of the United States for personal political gain.
And then Congress must impeach the President.


Posted by Jerry Morris at 6:54 PM No comments: