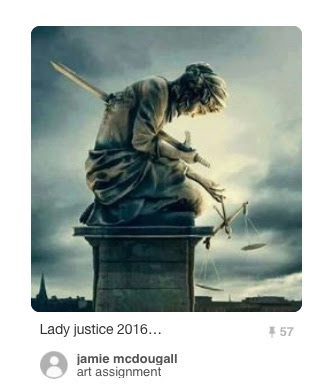 Posted by Jerry Morris at 11:39 PM No comments: 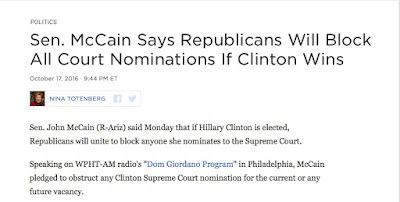 Posted by Jerry Morris at 5:23 PM No comments:


Back on June 21st, Paul Papanek, a Los Angeles photographer/writer/producer, and independent TV commercial production consultant, posted a few scenes on his Facebook page from the 1957 movie, A Face in the Crowd.  The movie, starring Andy Griffith, is about the rise and fall of a popular TV and radio character named Lonesome Rhodes, whose final downfall comes by way of an opened mike.  Here's an image of Papanek's Facebook post: 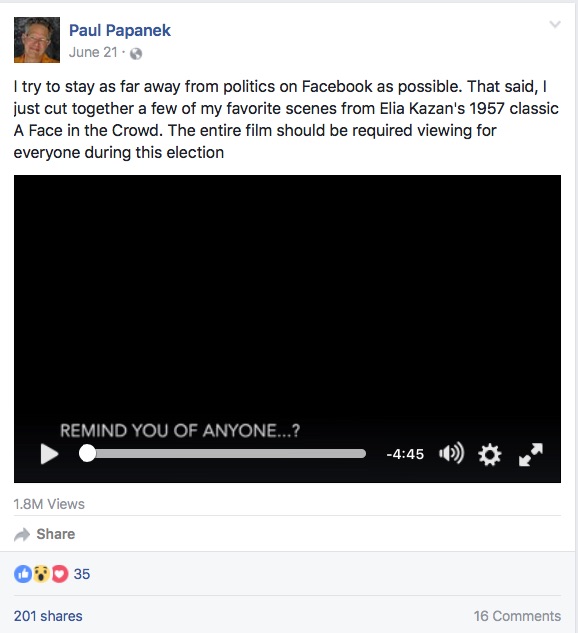 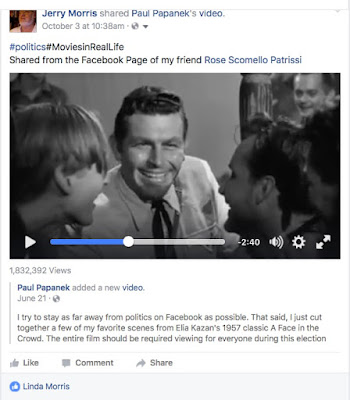 Only the day before, on October 2nd, Paul Papanek posted the video on YouTube, with the title: A Trump Face in the Crowd.  Here's a link to the video: 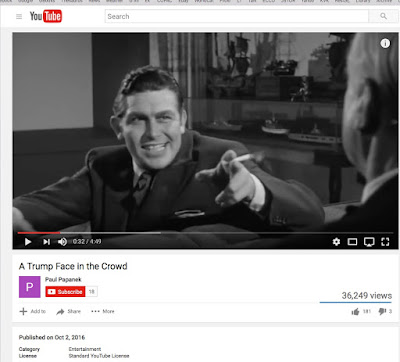 Posted by Jerry Morris at 12:38 PM No comments:

The Democrats were all out campaigning yesterday:  Hillary Clinton, Al Gore,  Barack Obama, and Bill Clinton–more stronger together than ever!

The Party of No is now The Party That Is No Longer Together.

And who can blame them?

For only the third time since it was founded in 1857, The Atlantic has endorsed a candidate.  The first was Abraham Lincoln.  The second was Lyndon Johnson. And the third is Hillary Clinton.

As for Donald Trump, The Atlantic states that Donald J. Trump "might be the most ostentatiously unqualified major-party candidate in the 227-year history of the American presidency."

The entire article is a must-read:

Posted by Jerry Morris at 10:58 AM No comments:

Things did not bode well for Donald Trump before the Second Presidential Debate last night.  If the first debate was a shoutout, this one promised to be a shootout.

But before the debate, Donald Trump posted a Facebook press conference where he introduced three women who had previously accused Bill Clinton of sexual assault, and one woman who accused Hillary Clinton of freeing a child rapist from jail.

Not surprisingly, the two candidates declined to shake hands at the beginning of the debate.

It wasn't really a debate. In reality, it turned out to be an unpresidential debacle at the All Is Not Okay With America Corral.

Early on, Trump was asked to explain his comments about women that were released the previous Friday.  He apologized but called his comments "locker room talk" and tried to deflect the talk to defeating ISIS.

When questioned again,  Trump denied any sexual wrongdoing and said that "he had great respect for women."

Hillary responded that people who listened to the tape realize that it represents exactly who Donald Trump really is.  She recounted the litany of disparaging comments Trump had made about people during the campaign.

When cornered again about being a different man since he said those lewd words about women.  Trump called them "just words–locker room talk" and deflected the talk to Bill Clinton's sexual abuse of women, and Hillary Clinton's representation of a client who raped a twelve-year-old girl, an accusation that snopes.com rated mostly false and inaccurate.

Hillary stayed high.  But some people think she should have said:


"I am running for President. Not my husband."

Trump stayed low, but stood high, frequently standing behind Hillary in predator mode, attacking her verbally anytime he could.  And promising to put her in jail if he got elected.

When asked about not paying federal income tax, Trump readily admitted it, but blamed Hillary for allowing him to be able to do it.

In a question concerning his 3 a.m. derogatory tweets about a former beauty queen, and his own words about the discipline needed of a leader, Trump blew the question off and tried to deflect it to Benghazi.

To sum it up, by his very words, demeanor, and actions last night, Donald Trump, the last misogynist standing, showed America that he is not fit to be President.


Posted by Jerry Morris at 2:28 PM No comments: 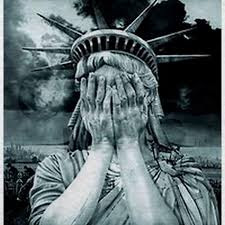 Posted by Jerry Morris at 7:34 PM No comments:

If I Were a Republican...


If I were a Republican, I'd most certainly vote for Donald Trump––anybody but Hillary!

I'd wake up in the morning and hope that WikiLeaks released secrets about Hillary while I was sleeping.  But I'd also hope that my candidate didn't twitter-bomb anybody else at three o'clock in the morning.

If I were a Republican, I'd hope that the Russians did hack Hillary's computer and that they would release those 30,000 missing emails.  Now that might seem un-American, but my philosophy––and I'm sticking to it–– is "Anybody but Hillary!"

If I were a Republican, I would want the investigative reporters to uncover the colluding that surely went on between the Clinton Charity Foundation and Hillary's actions as Secretary of State.  I just wish that somebody would find out something really bad about Hillary!  But I also wish that these very same reporters would stop finding problems with my candidate's charity foundation.... And I don't even want to think about the problems with his son's charity...

And I'd hope that one of Trump's ex-wives doesn't release any more pages of tax returns... And here I thought he was a great businessman....

...I wish I could trust him with running my country...