The Only Wall America Needs:
The American Immigrant Wall of Honor


The Only Wall America Needs:
The American Immigrant Wall of Honor
Ellis Island 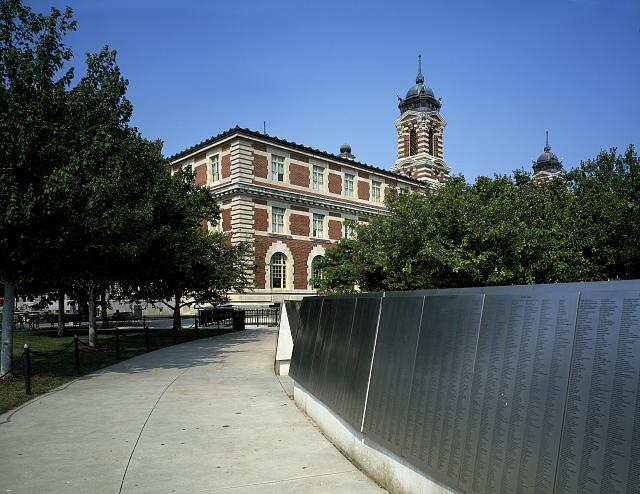 Posted by Jerry Morris at 5:06 PM No comments:

I offer this poem, written by Austin Dobson in 1874, as a token of solidarity with today's Women's March on Washington, and in cities all around the world. It is a message for all those Americans who voted to elect the 45th President of the United States of America.


When first he sought our haunts, he wore
His locks in Hamlet-style ;
His brow with thought was 'sicklied o'er,'–
We rarely saw him smile ;
And e'en when none was looking on,
His air was always woe-begone.

He kept, I think, his bosom bare
To imitate Jean Paul ;
His solitary topics were
Æsthetics, Fate , and Soul ;–
Although at times, but not for long,
He bowed his Intellect to song.


He served, he said, a Muse of Tears :
I know his verses breathed
A fine funereal air of biers,
And objects cypress-wreathed ;–
Indeed, his tried acquaintance fled
An ode he named 'The Sheeted Dead.'


In these light moods, I call to mind,
He darkly would allude
To some dread sorrow undefined,–
Some passion unsubdued ;
Then break into a ghastly laugh,
And talk of Keats his epitaph.


He railed at women's faith as Cant ;
We thought him grandest when
He named them Siren-shapes then 'chant
On blanching bones of Men' ;–
Alas, not e'en the great go free
From that insidious minstrelsy !


His lot, he oft would gravely urge,
Lay on a lone Rock where
Around Time-beaten bases surge
The Billows of Despair.
We dreamed it true. We never knew
What gentler ears he told it to.


We, bound with him in common care,
One-minded, celibate,
Resolved to Thought and Diet spare
Our lives to dedicate ;–
We, truly in no common sense,
Deserved his closest confidence !


But soon, and yet, though soon, too late,
We, sorrowing, sighed to find
A gradual softness enervate
That all superior mind,
Until,–in full assembly met,
He dared to speak of Etiquette.


The verse that we severe had known,
Assumed a wanton air,–
A fond effeminate monotone
Of eyebrows, lips, and hair ;

He read 'The Angel in the House' !


Nay worse. He, once sublime to chaff,
Grew ludicrously sore
If we but named a photograph
We found him simpering o'er ;
Or told how in his chambers lurked
a watch-guard intricately worked.


Then worse again. He tried to dress ;
He trimmed his tragic mane ;
Announcing at length (to our distress)
He had not 'lived in vain' ;–
Thenceforth his one prevailing mood
Became a base beatitude.


And O Jean Paul, and Fate,, and Soul !
We met him last, grown stout,
His throat with wedlock's triple roll,
'All wool,' enwound about ;
HIs very hat had changed its brim ;–
Our course was clear,––WE BANISHED HIM !

Posted by Jerry Morris at 11:15 AM No comments:

A Presidential Thank You

This is the third and last letter I have received from "My President."  Thousands of Americans will receive this letter from their President thanking them for writing him.  And to him, I say, "Thank you for being 'My President." 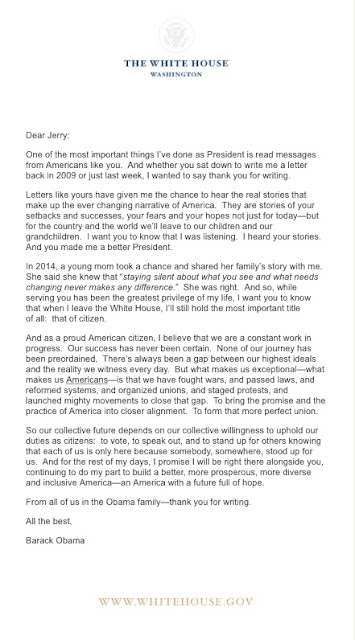 Posted by Jerry Morris at 5:53 PM No comments: 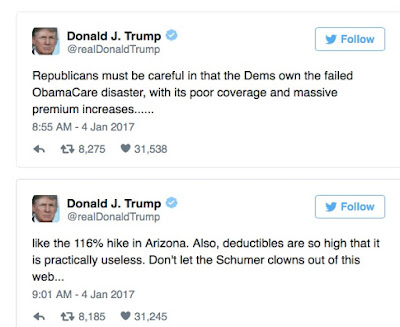 
Posted by Jerry Morris at 7:36 PM No comments: