Sermon on the Mount of Trump 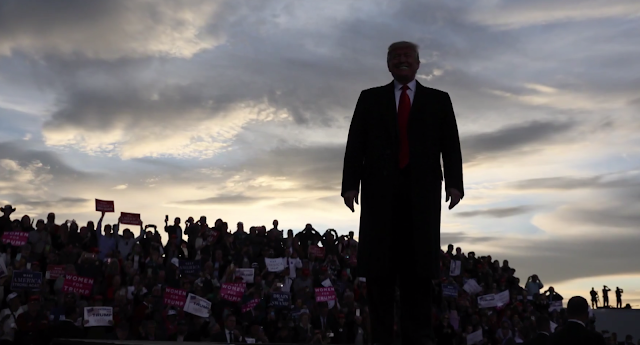 From this day forward, a new vision will govern our land.  From this moment on, it’s going to be America First.  Every decision on trade, on taxes, on immigration, on foreign affairs, will be made to benefit American workers and American families.  We must protect our borders from the ravages of other countries making our products, stealing our companies, and destroying our jobs.  Protection will lead to great prosperity and strength....

When you open your heart to patriotism, there is no room for prejudice.  The Bible tells us, “How good and pleasant it is when God’s people live together in unity.”  We must speak our minds openly, debate our disagreements honestly, but always pursue solidarity. When America is united, America is totally unstoppable.


Beware of false prophets, which come to you in sheep’s clothing, but inwardly they are ravening wolves.

Ye shall know them by their fruits. Do men gather grapes of thorns, or figs of thistles?

A good tree cannot bring forth evil fruit, neither can a corrupt tree bring forth good fruit.

Every tree that bringeth not forth good fruit is hewn down, and cast into the fire.

Wherefore by their fruits ye shall know them.


Having exaggerated his nervous and voluntary tension to the pitch of abuse, almost to vice, it is impossible that the American should amuse himself as we Latins do, who hardly conceive of pleasure without a certain relaxation of the senses, mingled with softness and luxury . . . [The Americans'] pleasures seem, in fact, to imply, like their ideas and their labors, something unrestrained and immoderate, a very vigorous excitement, always bordering on violence, or, rather on roughness and restlessness.  Even in his diversions, the American is too active and too self-willed.  Unlike the Latin, who amuses himself by relaxation,  he amuses himself by intensity, and this is the case whatever be the nature of his amusements, for he has very coarse and very refined ones.  But a few sketches from nature will explain better than all the theories that kind of nervousness, and, as it were, fitful sharpness in amusement, if we can use that word which is synonymous with two of the least American things in the world, –– unrestraint and repose.
A Fearful Game by Paul Bourget (1893)


These words were written by the French author Paul Bourget (1852-1935) during his tour of America in 1893. These words are the first paragraph of an article that described how Americans played a game of football at Harvard on November 30, 1893.  But these very words could have been written in 1982 as well.  And they could have pertained to any game an American male played, including the game of sexual conquest.

Bourget's essay, "A Fearful Game," was included in a series of articles first published in the New York Herald, and then in a book, Outre-Mer:  Impressions of America in 1895.  William Bentinck-Smith included Bourget's essay in the 1955 edition of The Harvard Book:  Selections From Three Centuries. 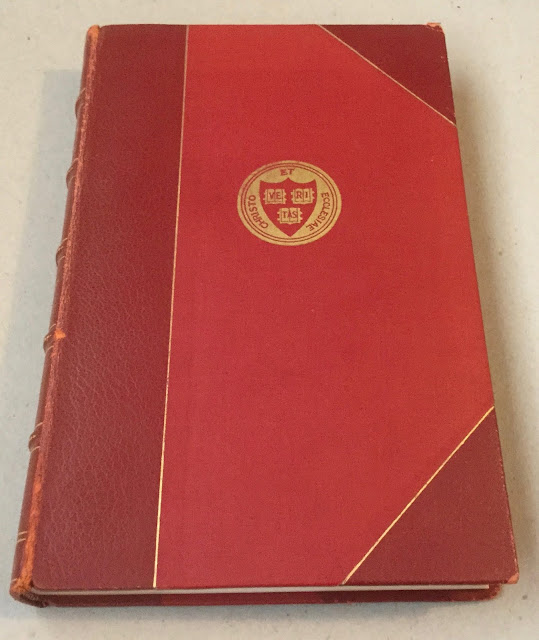 My copy of The Harvard Book is a Prize Book that was awarded by the local Harvard alumni to a student at Fairfax High School in Los Angeles, California who displayed "excellence in scholarship and high character, combined with achievements in other fields."  On the front cover is the old Harvard seal, "Ve Ri Tas" (Truth) in three books, surrounded by "Christo Et Ecclesiae,"  (For Christ and the Church).   The word, Veritas, soon stood alone on the seal, thanks to Henry Wadsworth Longfellow, who wrote a poem by that title in 1880, the last line of which was "let thy earliest symbol be thy last."

There is an excellent article about the history of Harvard's seal in the May 14, 2015 issue of the Harvard Gazette.  And the title of the article was "Seal of Approval." 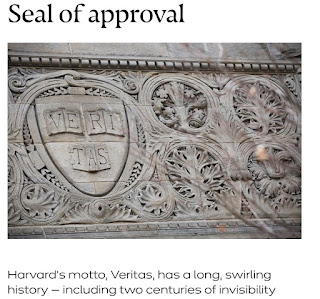 Bret Kavanaugh no longer has the seal of approval from Harvard Law School; he can no longer teach there.  And more than 2400 law professors across the country, including a retired dean of Harvard Law School, signed a letter opposing Kavanaugh's confirmation.   Yet, the United States Senate confirmed Judge Kavanaugh to take a seat on the Supreme Court of the United States of America.

Bret Kavanaugh appeared on Fox one night before the last confirmation hearing, and presented a choir boy image of his life in high school and college.  His yearbook says different, as do witnesses who have yet to be interviewed by the FBI, including some of his Harvard classmates.  And when confronted during the hearing, Kavanaugh testified under oath that "devil's triangle" was a drinking game, and "boofed" pertained to farting.  As for the sexual accusations, he followed Trump's defense: deny, deny, deny.

The FBI had its hands tied in the interview of witnesses regarding the accusations of sexual assault against Bret Kavanaugh by Christine Blasey Ford and then Deborah Ramirez.  But sooner than later––after the midterms–– Veritas Valebit: truth will prevail.
Posted by Jerry Morris at 2:40 PM 1 comment: