Revisiting the Interpretation of the Second Amendment


In the landmark Second Amendment court case,  District of Columbia v Heller, decided on June 26, 2008, the Supreme Court held that:

1. The Second Amendment protects an individual right to possess a firearm unconnected with service in the militia, and to use that firearm for traditionally lawful purposes, such as self-defense within a home.


2.  Like most rights, the Second Amendment right is not unlimited.  It is not a right to keep and carry any weapon whatsoever and for whatever purpose:  for example, concealed weapons prohibitions have been upheld under the Amendment or state analogues.  The court's opinion shall not be taken to cast doubt on longstanding prohibitions on the possession of firearms in sensitive places such as schools and government buildings, or laws imposing conditions and qualifications on the commercial sale of arms.  Miller's holding that the sorts of weapons protected are those "in common use at the time" finds support in the historical tradition of prohibiting the carrying of dangerous and unusual weapons.


3.  The handgun ban and trigger-lock requirement (as applied to self-defense) violate the Second Amendment.  The District's total ban on handgun possession in the home amounts to a prohibition on an entire class of "arms" that Americans overwhelmingly choose for the lawful purpose of self-defense.  Under any of the standards of scrutiny the Court has applied to enumerated constitutional rights, this prohibition––in the place where the importance of the lawful defense of self, family, and property is most acute––would fail constitutional muster.  Similarly, the requirement that any lawful firearm in the home be disassembled or bound by a trigger makes it impossible for citizens to use arms for the core lawful purpose of self-defense and is hence unconstitutional.


The above three paragraphs were copied from the syllabus of the case.  Justice Antonin Scalia gave the majority opinion in the 5-4 case.  Justice Stephen Breyer, in his dissenting opinion, gave an ominous warning of things to come:

Far more important are the unfortunate consequences that today's decision is likely to spawn. Not least of these, as I have said, is the fact that the decision threatens to throw into doubt the constitutionality of gun laws throughout the United States. I can find no legal sound basis for launching the courts on so formidable and potentially dangerous a mission. In my view, there simply is no untouchable constitutional right guaranteed by the Second Amendment to keep loaded handguns in crime-ridden urban areas.


The italics are mine.  Gun rights advocates firmly believe that the words of the Second Amendment,  shall not be infringed,  means that their Second Amendment right to bear arms is unlimited.  And even though the Heller decision pertained to handguns and other guns "in common use," that untouchable constitutional right now appears to cover everything from the carrying and use of military assault weapons to bump stocks as well.

In May 2013, I wrote about gun control and the Second Amendment in an article titled, A Well-Lobbied Government:  How the NRA Won the Battle Over the Second Amendment.  Republicans turned deaf ears to the parents of the children who were killed in the Sandy Hook Elementary School shooting and killed the bill for background checks. Why?  The NRA owns them lock, bump stock, and barrel.  Republican members of Congress are worried that the NRA will put them in their crosshairs and vote them out of office if they even dream of bringing a gun control measure to the floors of Congress.

In the closing remarks of his Opinion of the Court, Justice Scalia said:


Undoubtedly some think that the Second Amendment is outmoded in a society where our standing army is the pride of our Nation, where well-trained police forces provide personal security, and where gun violence is a serious problem. That is perhaps debatable, but what is not debatable is that it is not the role of this Court to pronounce the Second Amendment extinct.

Justice Scalia was correct in stating that it was not the role of the Supreme Court to pronounce the Second Amendment extinct.  The amendment would have to be repealed by another constitutional amendment; eg. the Twenty-First Amendment was passed to repeal the Eighteenth Amendment.

And when you get down to it,  the creation of the National Guard in the early 1900s effectively made the Second Amendment extinct.  Individuals were no longer required to bear arms to fulfill their civic duties; the government provided the arms.

People do have a natural right––sometimes called a common law right––to bear arms for self-defense.  This right, however, is limited by laws enacted by federal, state, and local legislatures.  Laws, which in the judgement of the legislators, are required for life-saving or safety-related interests.   (Justice Breyer used those very words in italics in his dissenting opinion in District of Columbia v Heller).

The origin of the original law that brought about District of Columbia v Heller is worth revisiting.  Edward D. Jones III, a former FBI agent, wrote an article which appeared in the May 1981 issue of The Annals of the American Academy of Political and Social Science.  His article was titled, "The District of Columbia's 'Firearms Control Regulations Act of 1975': The Toughest Handgun Control Law in the United States –– Or Is It?"  His article is the primary source
for my information provided below: 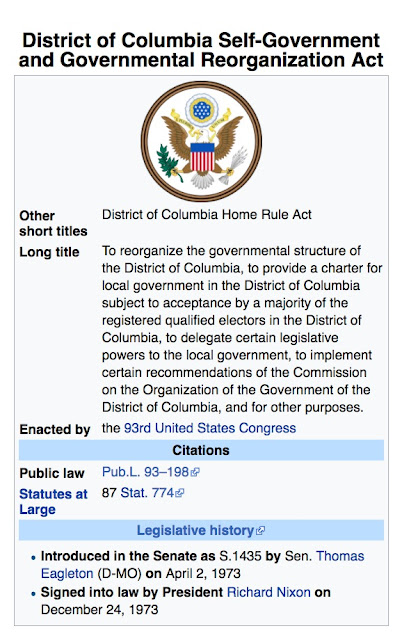 On June 29, 1976, in an attempt to reduce the district's crime and save lives, the Council of the District of Columbia voted 12 to 1 to pass the Firearms Control Regulations Act of 1975.  This act restricted city residents from owning handguns that were not registered at the time the law was enacted.  Moreover, handguns that were not restricted by the law had to be kept unloaded and either disassembled or bound by a trigger lock or similar device.  Mayor Walter Washington signed the bill on July 23, 1976.  And then the bill went to Congress for a 30-legislative day review.  The Council claimed that this act was a revision of the district's police regulations, and not related to criminal laws,

Congress had several options:  It could declare the Firearms Control Regulations Act null and void by simply ruling that it was a flagrant disregard of the four-year limitation on the enactment of criminal laws; it could pass a Resolution of Disapproval overturning the act; or it could take no action and the act would become law after the review period expired.

Consideration of handgun control legislation was a hot potato in 1976; it was an election year.  The Democrats controlled both the House and the Senate (66 seats in the Senate), but they were extremely mindful of placing any undue or unnecessary restrictions on firearms acquired for personal protection as stated in Section 101 of the Gun Control Act of 1968: 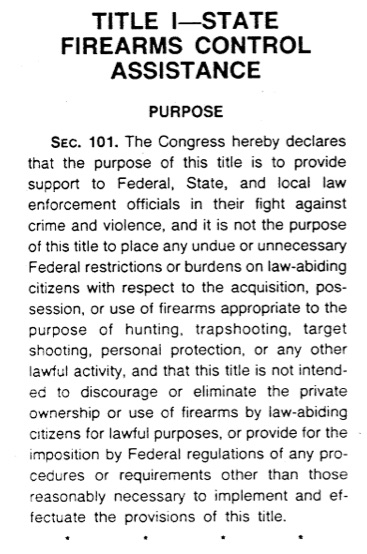 At the same time, the Democrats did not want to have to publicly disapprove a gun control measure that the District Council, in its judgment, believed was required for public safety.  So Congress attempted to punt! It passed an amendment to the District of Columbia Home Rule Act to extend the four-year prohibition on the Council's enactment of criminal laws another two years to 1979.  President Gerald Ford signed the bill into law on September 7, 1976. 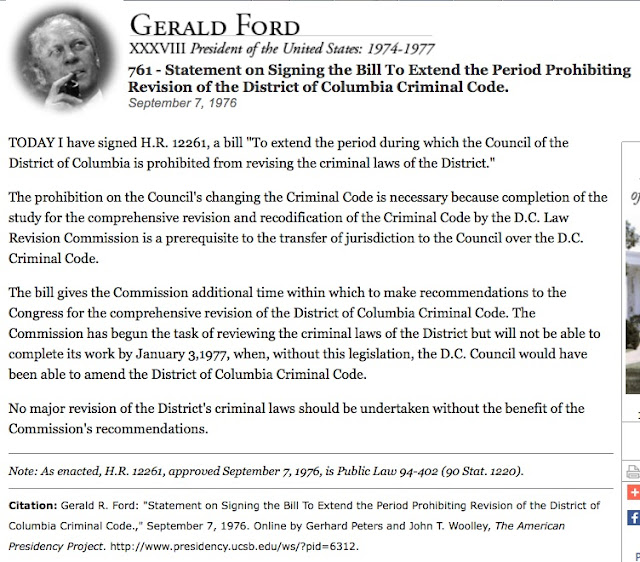 Unfortunately,  the Library of Congress Congressional Research Service advised Congress afterwards that the amendment to the Home Rule Act had no legal effect on the District's Firearm Control Regulation Act:  The District's act had been enacted before the amendment was passed.  Moreover, the amendment did not contain a retroactive clause.   Consequently, Congress took no further action. It did not declare the act a violation of the prohibition on enacting criminal laws.  And it did not pass a Resolution of Disapproval.  The measure simply died in committee. And the act became law when the review period expired. 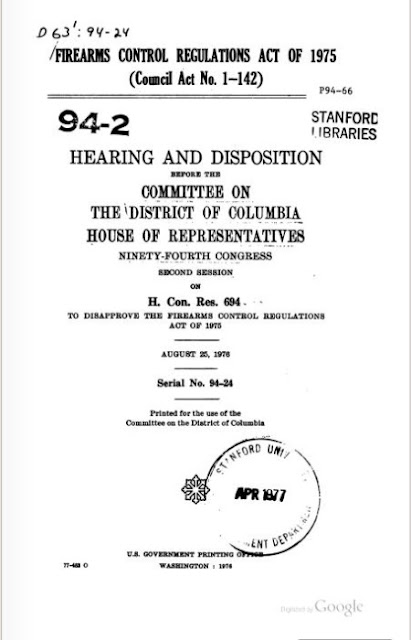 There's a Chronology of the act's passage in the pamphlet's appendix and I've posted it below.  Notice the Committee meetings postponed because no quorum was present? 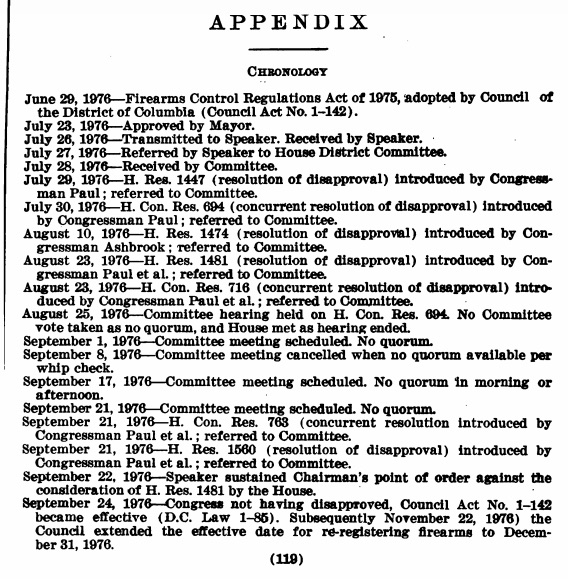 A June 26, 2008 Washington Post article provides a History of the D. C. Gun Ban.  It would take 30 years, more congressional inaction, and several court cases, but the Firearms Control Regulation Act finally made it to the Supreme Court.  And you know the rest.


If you haven't already read it, now is the time to read Justice Scalia's Opinion of the Court in District of Columbia v Heller.  And go ahead and read the dissenting opinions.  Then think about all the mass shootings we have had.  Now tell me why the right to bear arms needs to be an untouchable right.

We, the People, need to hold our legislators' feet to the fire.  We need to demand that legislators enact laws that provide for the safety of our citizens, while allowing for the reasonable carrying and use of guns by law-abiding citizens.  And they need to do it now!