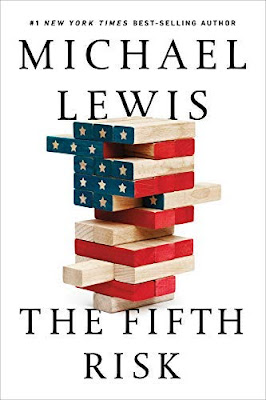 The Fifth Risk is the fourth political book about Donald Trump that I have read and reviewed this year.  The first book was Michael Wolf's Fire and Fury about the infighting in Trump's White House.  The second book was Craig Unger's House of Trump, House of Putin about Trump's business dealings with the Russian Mafia.  The third book was Bob Woodward's  Fear:  Trump in the White House in which Woodward gives the reasons why Americans have to fear while Trump is still in the White House.  The fourth book, The Fifth Risk by Michael Lewis, is the scariest one of them all.  This book is all about the transition of power from the Obama Administration to the Trump Administration––or specifically, the lack of transition.

One of the people Lewis interviewed for his book was John MacWilliams, Chief Risk Officer at the Department of Energy (DOE).  MacWilliams had made a list of the biggest risks in the DOE that the incoming Trump Administration would face.  And he was prepared to spend weeks briefing them to make sure they were aware of the biggest risks. But nobody showed up to be briefed.  Lewis quotes MacWilliams:  "There are things you want to know that would keep you up at night.  And I never talked to anyone about them."

MacWilliams informed Lewis of the five biggest risks within the Department of Energy:

A Broken Arrow, the term for an accident with nuclear weapons, is on the top of the list.  We have had nuclear accidents before, but so far safety mechanisms have prevented disaster.

North Korea.  MacWilliams said that there were signs that the risk of an attack from North Korea was increasing, and not necessarily a nuclear attack at that; it could be a chemical attack.

Iran is somewhere in the top five of the biggest risks.  The Iran deal approved under Obama was designed by scientists in such a way that, with absolute certainty, prevented Iran from building a nuclear weapon without our knowledge.  MacWilliams emphasized that Iran building a nuclear weapon was not the risk.  The risk was that "the President of the United States would not understand his nuclear scientists' reasoning about the unlikelihood of the Iranians obtaining a weapon, and that he would have the United States back away foolishly from the deal." And that is what happened!

The blurb on the flap of the dustjacket of The Fifth Risk begins with a question that says it all:  "What are the consequences if the people given control over our government have no idea how it works?  Compound that risk by the fact that nobody seemed to care.  They would run the government like a business!

Donald Trump did not feel he needed to have a transition team.  And he certainly did not want to spend any money funding it!  He even said to Chris Christie,  who volunteered to be Transition Chief, "Chris, you and I are so smart that we can leave the victory party two hours early and do the transition ourselves."  But that did not happen.  What did happen was Christie was fired as Transition Chief, reportedly by Jared Kushner.  Moreover, Christie's entire transition team of 300 people were dismissed as well.

Outgoing President Barack Obama was very pleased with the orderly transition that President George Bush had arranged for all the government departments.
And he planned on giving incoming President Donald Trump an orderly transition as well.  That did not happen.  Obama's people were ready and waiting to give Trump's people detailed briefings. But hardly anyone showed up for the transition briefings at any of the departments.  Where Obama had sent 30 people to the  DOE to receive briefings from Bush's people, Trump sent only one person to the DOE,  Thomas Pyle, a former lobbyist who wrote "editorials attacking the DOE's attempts to reduce the dependence of the American economy on carbon."  Pyle spent one hour in a meeting with outgoing Energy Secretary Ernest Moniz and several other DOE officials, asked no questions, took no notes, and never asked to see anyone in Obama's administration again.  And according to Lewis, the Secretary of the DOE, Rick Perry, had never been briefed on a single DOE program a year after Trump had taken office.

One thing the Trump Administration did do before the Inauguration was to rid all the departments of Obama appointees, 137 of them in the DOE alone, replacing them with Trump loyalists. Lewis notes that the woman who ran Obama's energy policy analysis unit was replaced by Eric Trump's brother-in-law.

Lewis methodically presents more of the same for the other departments as well.  The Fifth Risk:  Project Management, the scariest risk of them all.