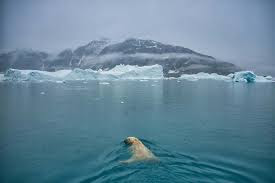 Donald Trump wants to buy Greenland from Denmark, and thus expand the territorial waters of the United States.   And he will name it Great Greenland!  He has even offered to cede Puerto Rico to Denmark!

Such a purchase would indeed expand the territorial waters of the United States because Greenland is melting.  OMG, Oceans Melting Greenland, is a five-year NASA project to measure the effects of ocean water on Greenland's rapidly melting glaciers.  The project is in its fourth year, and in a recent CBS news report, OMG estimates that Greenland is melting six times faster than it was in the 1980s.

Donald Trump, however, wants to purchase Greenland.  On Fox News last night, he stated, "I, and I alone, can stop Greenland from melting!"

The purchase of Greenland, however, requires the approval of the Senate.  But Senate Majority Leader, Mitch McConnell, has already stated he will use the nuclear option in order to ratify the Great Greenland Purchase.
Posted by Jerry Morris at 10:53 AM