Cursory Remarks on the Current State of the Union 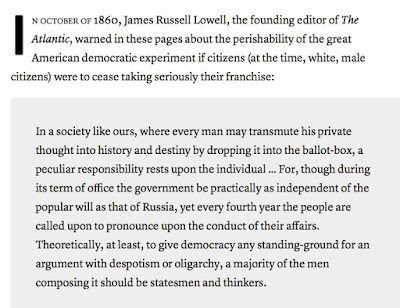 For only the third time since its founding in 1857,  The Atlantic endorsed a candidate: Hillary Clinton. Worth repeating  was The Atlantic's rejection of the other candidate:


...but we are mainly concerned with the Republican Party’s nominee, Donald J. Trump, who might be the most ostentatiously unqualified major-party candidate in the 227-year history of the American presidency.

Where does the Majority of Americans–those of us who voted for Hillary–go from here?

How could this have happened to America?

Congress said it is going to investigate the Russian intervention of our electoral process.  And Congress should–but it won't–investigate the Giuliani/Flynn connections to the FBI that affected the outcome of the election.

As for those who voted for Trump, we are ashamed of you. 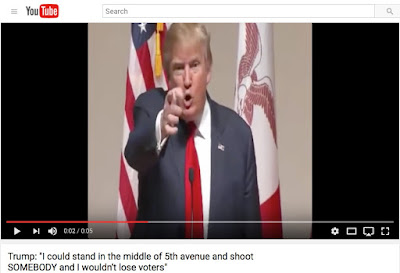 On January 23, 2016, in making a point about the loyalty of his followers, Donald Trump said, "I could stand in the middle of 5th Avenue and shoot somebody and I wouldn't lose any voters okay."

And now he is on the doorsteps of the White House, and the majority of Americans are ashamed.

As for the Trump followers, those who voted for Trump–our brothers, sons, fathers, sisters, aunts, uncles and yes, former friends–they have lost our respect. They have made America morally bankrupt.

Do they really think he is going to make America Great again?

Drain the swamp! Did he?  Not by the looks of his cabinet choices.

And how about all those Russian connections?

Are you proud of yourself?

Aren't you afraid of what Trump can do to our country?

We are very afraid.

And we are ashamed of you for making us feel this way.

Even if we are only individual voters, when we speak out we speak differently and each voice against this fascist regime helps.