I, like most Democrats, am still shocked by the outcome of the Presidential election.  Around the middle of October, it appeared that Hillary Clinton would become the next President of the United States.  Trump was imploding, Republicans were abandoning ship, and there was even talk that the Democrats were going to retake the Senate.

On October 19th, Jason Easely wrote an article for PoliticusUSA reporting that Trump's own campaign manager did not agree with Trump that the election was rigged: The Rats Flee the Sinking Ship as Trump's Own Campaign Manager Throws Him Under the Bus.

On October 21st, the website Five Thirty Eight gave Hillary Clinton an 86.5% chance of becoming the next President of the United States.  And it gave the Democrats a 73.5% chance of retaking the Senate!

Even the USC/L.A. Times Poll had Hillary ahead on Oct 24th and 25th!

Rudy Giuliani happened to be at the Al Smith Charity Event in New York City on October 20th.  And Hillary Clinton made her biggest mistake! She belittled Giuliani for calling Trump "a genius" for not paying taxes.

And Giuliani was not amused:   Huffington Post Article: Giuliani Was Not Amused.... 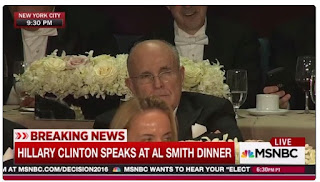 On October 25th, Rudy Giuliani appeared on Fox and Friends, chuckled and said that the Trump camp still had a few surprises up their sleeve.  When asked if they were October surprises, he chuckled again and said, "You'll see...:" 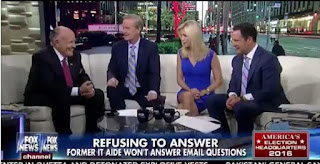 On October 28th, James Comey released his bombshell that the FBI was looking into more Clinton emails.  And Rudy Giuliani was still chuckling!

On November 2nd,  Fox News' Bret Baier reported that an avalanche of evidence had the FBI heading toward an indictment of the Clinton Foundation.  And Rudy Giuliani couldn't stop chuckling! 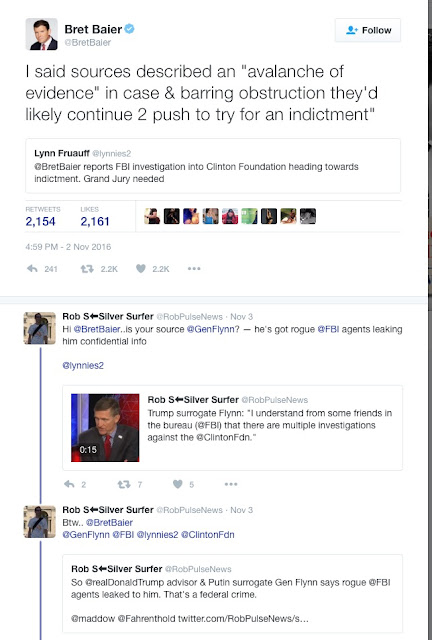 Note in the tweets above what Gen Flynn said.  Also note Rachel Maddow's comment about the FBI leaks.

On November 4th, CNN's Don Lemon called out Giuliani for hinting about the Comey letter two days before it happened.  Did Giuliani use his FBI contacts to stir the pot and get even with Hillary?  One of Giuliani's companies represents the union of active and retired FBI agents.

On November 6th, James Comey reported that the FBI had completed their investigation and had turned up no new damaging emails.  But the damage had already been done.  On Nov 6th, the USC/L.A. Times poll had Trump ahead again:

And Rudy Giuliani was still chuckling!


You know the rest.  The Clinton campaign never recovered.  Trump voters voted down the ticket.  Trump won the election, and the Republican party retained control of both houses.


And now Rudy Giuliani believes he "earned" Trump's nomination to be Secretary of State.