This business of high crimes and misdemeanors goes to the question of whether or not the person serving as President of the United States put their own interests, their personal interests, ahead of public service.

Mike Pence's words on impeachment are one of three epigraphs that Neal Katyal quoted in the beginning of his book,  Impeach: The Case Against Donald Trump, Boston: Houghton, Mifflin, Harcourt, 2019. 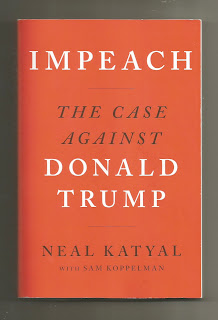 Katyal calls Pence's words the "Pence Standard," and cites it several times in his book, all the while making the case why Donald Trump needs to be impeached. Katyal believes that Pence's quote "perfectly distills why our founders believed Congress has an obligation to hold accountable a President who abuses the power of his office."

Pence's quote is actually a statement he referenced from a witness's report during a congressional hearing on July 25, 2008.   The hearing was entitled "Executive Power and its Constitutional Limitation," and is well worth revisiting, as is Pence's reasoning for using the quote.

The Democrats controlled the House in 2008, and the July 25, 2008 hearing was the second session of the House Judiciary Committee Hearing on Executive Power and its Constitutional Limitations.  John Conyers, Chair of the Judiciary Committee, called the hearing to  discuss the separation of powers and the perceived excesses of the executive branch of President Bush.

The Judiciary Committee previously held 45 separate hearings on perceived executive abuse of power, including the manipulation of intelligence regarding weapons of mass destruction in Iraq, the ordering of the illegal use of torture, the outing of Valerie Plame, the firing of U. S. Attorneys for political purposes, and the obstruction of congressional oversight by ignoring subpoenas of witnesses called to appear before Congress.

It should be noted that the House never voted to authorize a hearing of the Judiciary Committee on the topic of Impeachment. Nevertheless, that's exactly what the July 25, 2008 hearing was about under the guise of another name.

Each member of the Judiciary Committee was permitted to make an opening statement, and in his Pence began by addressing the elephant in the room:


Thank you, Mr. Chairman.
I note this hearing is entitled "Executive Power and Congressional Limitations." And I want to say that I accept the Chairman's assurance that it was not his intention to convene a hearing today on the topic of impeachment. But I know that many here on both sides of the rostrum and many looking in are anxious to debate whether the 43rd President of the United States should be impeached. And I would like to address myself to that issue in my opening remarks.

Later, when it was Pence's turn to question the witnesses,  he directed his questions solely to Presser. In his report to the Committee, Presser elaborated that James Madison and George Mason argued about whether the term malAdministration, differences in the administration of and pursuit of different policies, should be included as a basis for impeachment.  Madison won the argument and the term malAdministration was not included in the Constitution.


It seems to me, though, you make a point in your report that this business of high crimes and misdemeanors goes to the question of whether or not the person serving as President of the United States put their own interests, their personal interests, ahead of public service.


Mr. Pence: Do you see any evidence of any of these policy differences with the current Administration the same types of -- same type of conduct that would be high crimes and misdemeanors?
Mr. Presser: No, sir.
Mr. Pence: That is the briefest law school professor I have ever met in my life....