A Troubling Fact Regarding the 2020 Presidential Election

Granted, these Americans had a right to vote for Donald Trump.  And they exercised that right.  But what would have happened if Donald Trump had been re-elected?   Would he have turned around and instructed everyone to wear masks during this epidemic?  I don't think so.  He would have continued to do nothing to contain the coronavirus until the vaccine was readily available.  And how many more Americans would have needlessly died in the meantime?  Thousands.  Didn't these voters realize that?   And if Donald Trump had been re-elected, would these voters have been morally responsible for the thousands of Americans who would have needlessly died while waiting for the vaccine?  That is what troubles me.

There is a May 2007 Irish Times article on the web titled "Voting is a Serious Moral Responsibility."  The gist of the article is that voters have the moral responsibility to vote for the candidate who can best take care of the welfare of their fellow citizens. 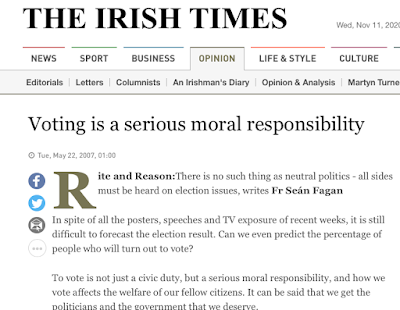 That, clearly, is my thinking.  Donald Trump refused to even try to control the coronavirus.  Because of that,  I believe the 71 million American who voted for him shirked their moral responsibility to vote for the best candidate.  Sure, one can argue, that controlling the coronavirus isn't everything.  That there are many more responsibilities of a President.  But, to me, life is paramount.  In our very own Declaration of Independence, life comes before liberty and the pursuit of happiness.  Life matters.  And Donald Trump did nothing to safeguard American lives from the coronavirus.  It did not go away like he said it would.

The author of the newspaper article, Sean Fagán, wrote an interesting book in 1997 titled, Does Morality Change?  I already ordered a copy and it is on the way to me.  I'm hoping his book can shed some light on my understanding of moral responsibility in today's world. 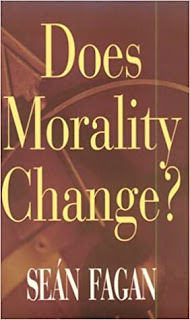