There Are No Coronavirus Liability Waivers For This Election 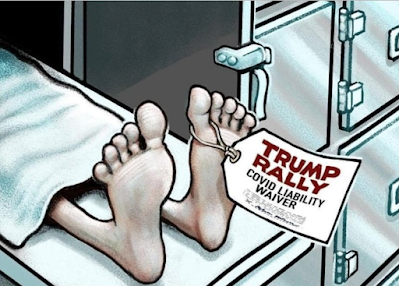 This picture says it all about the Trump presidency.  He refuses to take responsibility for the 230,000 Americans who have died from the coronavirus during his watch.  And the Republicans in Congress have blindly followed his every misstep lock step and barrel.  They, too, take no responsibility for the situation our country is in.  Then there are the Americans who voted for Donald Trump in 2016, and who intend to do more of the same in 2020.  If they have their way, and if Donald Trump get reelected, we will have more of the same.  They need to take responsibility for the situation our country is in.

Things could have been different.  President Donald Trump could have controlled the spread of the coronavirus, and thus save thousands of American lives while doing it.  All he had to do was to listen to the scientists.   He could have recommended that everyone wear a mask and practice social distancing.   Instead, he ridiculed those who wear masks.  And he held political events in the People's Rose Garden, where social distancing most certainly was not practiced.  Of late, Donald Trump is holding last-ditch political rallies to try to save his presidency.  His followers, however, have to sign liability waivers because the Trump administration does not want to be responsible for anyone who contracts the coronavirus during these super spreader events.

The Republicans in Congress could have helped control the spread of the coronavirus, and thus save thousands of American lives while doing it.  They could have provided congressional oversight.  They could have steered the Trump Administration to do what was best for America.  They could have pressured Donald Trump to invoke the Defense Production Act to provide the much-needed personal protective equipment for our healthcare workers and other essential personnel.   They could have supported a national mask mandate. They could have passed a second Stimulus bill to provide financial aid to Americans and to the cities who so desperately need it.  Instead,  the Republicans in Congress have all but shirked their congressional oversight responsibilities.  They let the Trump Administration do what was best for Donald Trump.  As for the Americans in desperate need for financial aid, the Republicans let them down.  As for the cities in desperate need for financial aid that Congress failed to provide they will have to begin laying off healthcare workers and other essential personnel.

Then there are the Americans who voted for Donald Trump in 2016, and who intend to do the same in 2020. Many of them could have worn masks in public, practiced social distancing, and thus saved countless American lives.  Instead, they brazenly flaunt local mask mandates, and social distancing recommendations. If they are asymptomatic, they are the unknowing super spreaders of the coronavirus.  They need to take responsibility for their actions.

Donald Trump could have won the upcoming election in a landslide.  Republicans in Congress could have retained their seats.  All Americans could have been proud of the way Donald Trump handled the spread of the conronavirus – if only he had listened to the scientists.

They say that this election is not just about Donald Trump versus Joe Biden.  It is about the future of America.  That is oh so true.  Think about it.

What will happen if Donald Trump gets reelected?  As he has repeatedly said, will the coronavirus go away right after the election?  I don't think so.  Sure, we will eventually get a vaccine, but experts are saying that the public won't get the vaccine until the spring.  In the meantime, how many more Americans will die from the coronavirus?  Another hundred thousand?  Two hundred thousand? A quarter of a million Americans?  Do you think Donald Trump will suddenly tell everyone to wear masks?  I don't think so.  When it comes to the coronavirus,  we are looking at more of the same under a second Trump presidency.  And, mind you, the experts say, ""where the coronavirus goes, the economy goes."

What will happen if Joe Biden gets elected?  As he has repeatedly said, he will listen to the scientists.  He will suggest a national mask mandate on day one of his presidency.  That, coupled with increased rapid testing, contact tracing, and temporary lockdowns where necessary where and when necessary will save countless American lives.  And while the spread of the coronavirus is being controlled,  President Biden will work with Congress to restore the economy and build back better – especially if the Democrats take control of the Senate as well.  When it comes to restoring the economy, Joe Biden has the experience to do it.  He has done it before, after the 2008 financial crisis.  President Obama had Vice President Biden work with his former colleagues in Congress to restore the economy.  And restore the economy they did, even though it is Donald Trump who takes credit for it.

They say that most Republican voters wait until election day to cast their ballots.  If you are a Republican voter, I urge you –no, I plead with you –– to consider, I mean really consider –– who can best control the coronavirus in the coming months.  Your vote will determine how many more Americans will die from the coronavirus in the coming months.  You must take responsibility for your vote.  There are no coronavirus liability waivers for this election.