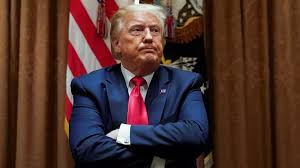 Find a new home Mr. Trump! New York doesn't want you.  Neither does Florida! And take your Proud Boys, QAnon, and your other deplorables with you! America has voted. You are the loser. America no longer wants you.
You should have been gone right after the Mueller Investigation. But your Attorney General William Barr saved your ass! No collusion! No Obstruction! That's what Barr said, and that's what you and your followers proclaimed.
But over seven hundred former federal prosecutors signed a letter saying you would have been prosecuted for obstruction if you were not President.  If there were no obstruction, Mueller surely would have been able to prove that you and your intermediaries colluded with the Russians and helped them interfere in our elections.

You should have been gone right after the impeachment.   Yes, your "perfect" phone call. You withheld military aid for a country in a war with Russia in order to coerce its leaders to provide damaging material against a potential Presidential Primary candidate.
But all but one of the Republican Senators saved your ass!  Afterwards, you became King Trump, all knowing and all powerful.  No one was willing to get in your way.
What was it you once said? "I alone can fix it." But you didn't fix it, did you?

You could have and should have fixed our country's response to the coronavirus! You, and you alone are responsible for too many Americans who have died from the coronavirus.
All you had to do was to lead the country in fighting the coronavirus.  You should have echoed CDC guidelines and strongly recommended that Americans wear a mask and social distance.  You should have set an example and worn a mask yourself.  Instead, you made it into some sort of personal freedom on whether an American citizen should wear a mask or not.
You could have and should have enacted the Defense Production Act and provided the necessary PPE first response workers desperately needed.  Instead, the states had to compete against each other to acquire the necessary PPE.
Congressman Lloyd Doggett provides a timeline of your coronavirus responses on his blog. And it includes memos to you that Bob Woodward revealed in his book Rage.
Timeline of Trump's Coronavirus Responses 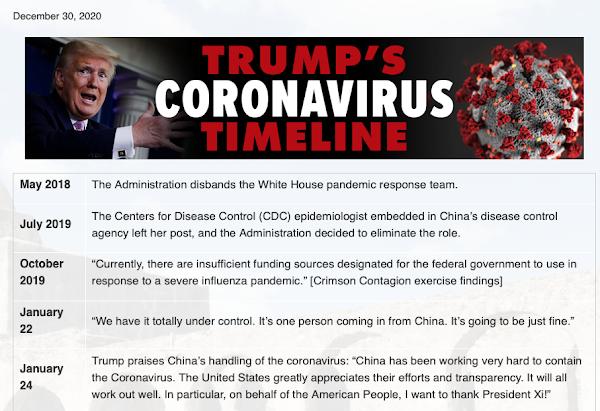 I mention Bob Woodward's book about you, so aptly titled Rage. Here is my review:

Here's my review of Woodward's first book about you, Fear: Trump in the White House.

Yes! Begone Mr. Trump, thou foul smellfungus. Thou foul off-scouring of the earth and inhuman human. Antiquity hast watched in anticipation of thy malignant coming with agonizing morbid melancholy. Begone and good riddance Mr. Trump! No "farewell" shall be given at your departure - only thanksgiving and praise to the Political Gods. Mr. Trump, may the road your feet desecrate be cleansed by the spritz of holy water and the smoke of incense cast from a swinging thurible. I pity thee road; forced to unwittingly bear the burden of thine corpulent, gelatinous, and obese posterior! And yea, pity and tender mercies to thee, door that slams shut behind this untoward Behind! O pity the door that was destined for this great, but honorable dishonor. O praise thee, slamming door that swats, with a nettles sting, on the Asses' ass. Praise thee thou Door of Rebuke and Reproof! Praise, praise, praise to thee O Door of God!